Saturday night in West Town, in the alley south of Chicago Avenue, stood Angel Marin, beer in hand, blue barrette in hair, with two ceramic baby dolls in a ladybug pouch strapped across his front. Some people had come outside to smoke, others to spectate. The door of the garage behind Defibrillator Gallery (DFRBL8R) was up, beneath it, a court had been drawn on which two not-particularly-athletic-looking people exchanged a volleyball that ricocheted off the low ceiling and hanging buckets. These were Lauren Steinberg and Max Hart, in a performance that lasted throughout the evening called Pass-Rite: ‘I’ll Show You,’ named after the brand of the bungee cord devices they wore, which volleyball players use to train. Throughout the evening, during the other performances inside, the thought of Lauren and Max passing—in both senses of the word—mostly without an audience, remained as a poignant afterimage of social activity which, if successful, goes undetected.

This was part two of Scoring and Keeping Score, the recent, two-night exhibition by a group who call themselves “Shapeshifters.” Ten artists from the School of the Art Institute of Chicago presented video works at the Nightingale Cinema and objects, performances, and installations at DFBRL8R. Most of the artists used the split venue to show iterations of the same projects. On the first night, Celia Wickham presented a video titled You’ll Belong To Me, I’ll Belong To You, a montage of digitized 8mm home movies of the artist’s mother as a child. At DFBRL8R the same video was projected in a boho-chic shrine in the basement, which viewers were asked to descend into one at a time with a candle. This installation resisted the move to the gallery by creating a space for solitary contemplation. A surprising side-effect was a country music yodel escaping the basement from the video’s soundtrack filling quiet moments in the other performances. Whether intentional or not, this sweet note hinted at the difference between simultaneous gallery and linear screening presentations. 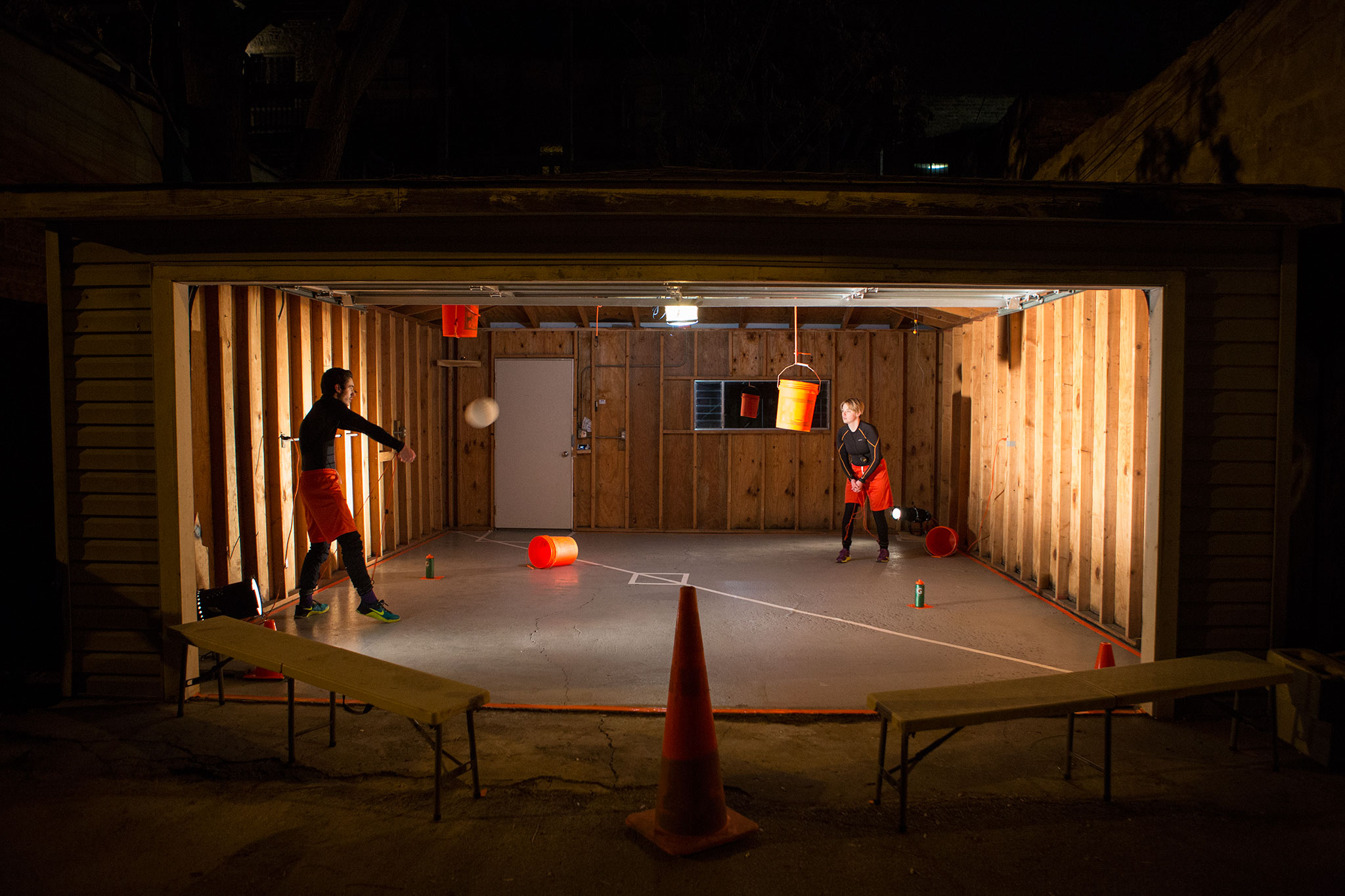 In the program for the night at DFBRL8R were floor plans labeled Acts 1-5, but where and when individual works ended was not clear. Maybe because of the intervention of artist Misael Soto, who for their part directed a crew of three people to move benches, lights, and walls, as well as the artworks themselves. Works by Paris F. Jomadiao and Caroline McCraw toured the space throughout the evening—nominally to accommodate performances but also to create constant flux for flux’s sake.  In contrast, the first night’s screen created a feeling of consistency across disparate works. But the Shapeshifters’ impatience with the integrity of any one form was expressed in their introductions to the program, which included cheese pairings for each group of videos: blue cheese, goat cheese, manchego, and before the last group Cheez-Its with Cheez Whiz. The latter was cheese “deconstructed and reconstructed,” our hosts explained. Just as the word score is both a verb and a noun in the show’s title, no element was allowed to be just itself, not even the hors d’oeuvres.

What is at stake in a project which changes medium and forms? Was this exploratory investigation? Resolute indeterminacy? Or merely dabbling? Could it be that one conservatism—a belief in the singular work of art—has been succeeded by an equal and opposite conservatism in unexamined proliferation? A chorus of voices, which is supposed to expand understanding, is drowning out a unified (unifying) harmony of belief and works with important, straight-ahead politics get lost in the crowd, like facts on Facebook. The quietest work in the show was a set of t-shirts made by Jomadiao, embroidered with cryptic statements like,

In the program, the artist explains that these new Verses (the title of the piece) combine “words mined from both the Philippine and American national anthems.” More than the lyrics used in the artwork, the word mined evokes the exploitative state practices in both violent countries. This was a work worth a kind of consideration made difficult in the chaotic happening of the exhibition.

On the other hand, the night at DFBRL8R was bookended by loud, unaccountable, all-encompassing performances that cut through the noise. Artist duo Máire + Mia, who are building a world around their brand, Sad Girls Club TV, opened with “Women on Women Presents: Reality TV: A Femocratic Panel Discussion,” a work which is self-explanatory and inexplicable. The performance’s ambiguity, trying to have a serious discussion within an absurd satire, forced participation in, if only to think one’s way out of, its thorny issues. As the audience started to pose earnest questions to the obviously fake academics on stage, the deep unreality of current politics was put in stark relief: What makes these performers any less capable than, for example, a reality show personality to insert themselves into political discourse?

Marcela Torres ended the exhibition with No Contest: Solo Match. Soto and crew constructed an eight-sided MMA-style cage in the gallery, on which Torres climbed and crawled, in and out, over and through. Then she directed the audience to find partners with whom to practice hits, kicks, and blocks; blowing a loud whistle if they lost focus. Once she had the crowd fully absorbed—concentrating on their feet and shoulders, pivoting and following through—Torres left the room unnoticed. It was a cunning use of participation. Even without an instructor, the people were teaching themselves to fight. But to what end?

Scoring and Keeping Score was presented with curatorial support from Latham Zearfoss at the Nightingale Cinema on December 2nd and at DFBRL8R on December 3rd, 2016.

George Olken (b. 1984, Boston, Mass.) is a filmmaker and cookiemaker studying writing at the School of the Art Institute of Chicago.
View all articles by George Olken