A Google search on millennials (the demographic cohort born that begins roughly after 1980) leads to some immensely depressing but interesting trivia. A recent New York Times article, for example, states that this generation is less likely to believe in free speech. Despite data showing the contrary, millennials are described as narcissistic, lazy and unenterprising. For many media outlets, these characterizations often gloss over the world inherited by the millennial generation. Record economic, environmental and humanitarian crises, and challenges to societal norms more often seem to qualify the scapegoating of an entire generation rather than prompting sharper introspection.

Coming of Age, curated by Caroline Picard at the Sector 2337, is a survey of international artists, comprised primarily of millennials (and a few genX artists), that offers a much needed critical reflection on the times. Densely packed with painting, sculpture, performance documentation and installation, Picard isolates these works from the anxiety of civilizational decline projected onto millennials, focusing intently on the distinct and meditative approaches each artist takes in constructing a cosmos of their own.

Many of the works in the exhibition are pictorially and sculpturally built environments, familiar, but physically uninhabitable by human life. Coming of Age is an unexpectedly utopian exhibition, in which humanity is primarily represented through celebrations, mimesis, and built environments. Exemplary of this stance is the “non-place” of Rhonda Holberton’s immersive vinyl print, A Fixed Resistance, which covers an entire wall with a black and white composite of photographs from various desert landscapes. The work functions as mise-en-scène; an impenetrable tabula rasa that redundantly imbues the empty wall with a feeling of barrenness. As it is in this desert, bodies are sparse within the exhibition, but where figures are present, they perform collectively or in harmony with other organic life. Essi Kausalainan’s video captures two costumed dancers beachside; before a vast and clouded ocean sky, the dancers move slowly across the screen ritualistically as if to emulate a tangle of seaweed or wood drifting ashore. 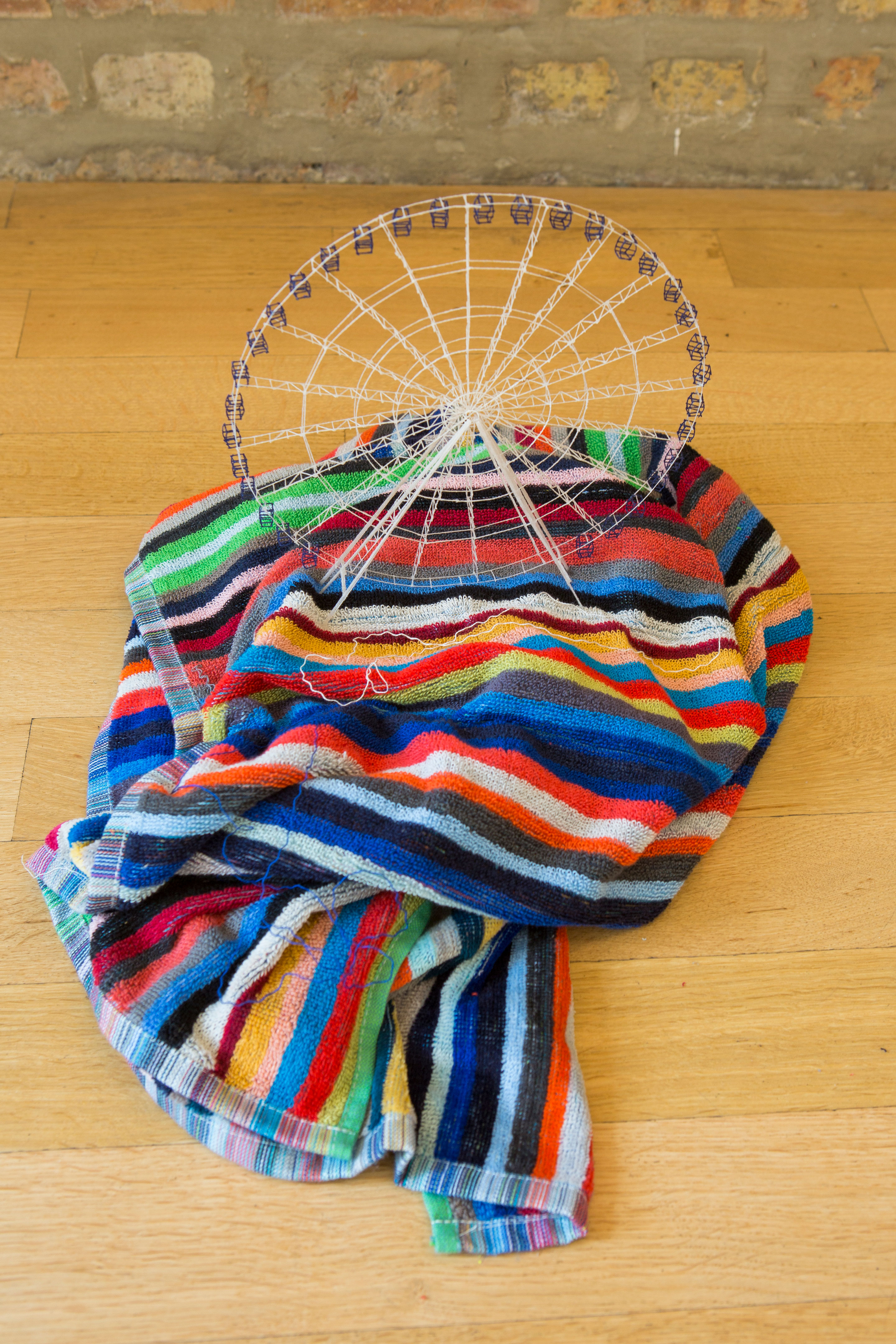 Ebony Patterson’s Embellished Coffins are built from construction-grade wood, covered by various quilted and patterned fabrics, and stand freely in the gallery space, mounted to poles and weighted to the ground. Nearby is a video documenting these same coffins as they are paraded down a street in a procession, not unlike those witnessed on Halloween or Dio de los Muertos. Again, as with Holberton’s Fixed Resistance, the viewer is faced with an impossible realm, the realm of the dead. But death (and violence) as represented by these coffins, should not be buried and forgotten, but rather brought to the surface, examined as Rebecca Beachy does by using animal remains as the material for their two installations.

Takahiro Iwasaki’s minuscule architectural models display an empathic relationship with the excess of materials we use and produce. Built of everyday materials–the fibers that weave together towels, book cloth, and the hairs of toothbrushes–these delicate works, Iwasaki presents us with the fragility of our own built environment. By contrast, Aki Inomata wryly produces luxury items for non-human organisms as a commentary on how commodification extends into inter-species relationships. A set of her precious, 3D-printed hermit crab shells occupy a long, dark corridor in the gallery, displayed in an elegant vitrine. These shells are modeled after various international cities including New York City, Tokyo, Santorini, Fujian, and Bangkok. Designed to house the crabs as they outgrow one and move into another, the pieces suggest the ambivalence of non-human organisms towards our own civilizations.

Despite some breathing room, Tsherin Sherpa’s contribution – a literal melting pot of Tibetan Buddhist tradition of painting and the modern op art tradition – felt dwarfed and crowded by the works of Inomata and Iwasaki. Still, the overall feeling of Coming of Age is one of repose; a symphony of voices in contrast to the narcissistic cacophony attributed to the generation. The works are autonomous, mainly loosened from the grip of any specific political context in order to speak for themselves. This is a decidedly “chill” show, in which the absence of human life and a parade of coffins are no cause for alarm. Far from equating to human extinction or obsolescence, the exhibition proposes ways forward out of dark times, while accounting for the presence of flora, fauna and the stuff of our own making that occupy this world as well.

Max Guy is an artist based in Chicago. He received his BFA in Interdisciplinary Sculpture from the Maryland Institute College of Art in 2011, and MFA from the Department of in Art, Theory, and Practice at Northwestern University in 2016. Max co-hosts Human Eye, an occasional podcast on art and life with artist Miranda Javid. He is currently an artist in residence at the Hyde Park Art Center. Visit Max's Website
View all articles by Max Guy