Art shown in non-art spaces didn’t make me nervous until last spring, when I exhibited my work at a coffee bar/gallery converted from a Greek revival church, a palace of ruin-porn. My pieces complemented the yellowed, peeling paint almost too nicely; when I stopped by one evening to adjust a drawing that had fallen, a security guard reprimanded me for touching them. “Don’t worry, I’M THE ARTIST,” I screeched into his earpiece, but my voice was drowned in alt-J’s “Breezeblocks.” As he yelled back, “You can’t just go into public places and hang up your artwork!” I realized he was noticing them for the first time. “Gallery” was evidently last of the venue’s priorities.

Entering Unison, a modern home décor store in Wicker Park, I feared that Alex Chitty’s work would meet a similar fate. My eyes were immediately drawn to sleek red-and-white kitchenware, an arrangement of biscotti on a cake stand, and finally to signs announcing Unison’s white sale. I later joked with Chitty about how I was expecting her pieces to be camouflaged within Unison’s inventory: could they be the wicker baskets on that white shelf, or perhaps the array of crumpled paper above the archway? It turned out her work was fairly conspicuous: three sculptures in a storefront window and an edition of seven small chromogenic prints on display by the register. I was wrong in my initial assumption about the venue: Unison is a safe space for art, largely because it goes beyond merely providing artists with space to show their work. Rather, artists are invited to collaborate with the shop to produce something unique to the space.

Every couple of months, Unison’s co-owners – designers Robert Siegal and Alicia Rosauer – partner with local artists to produce goods for the shop’s collection, such as the textiles they designed with collage artist Stephen Eichhorn and painter/printmaker Hillery Sproatt. However, Siegal explains that Alex Chitty + Unison is the first collaboration not intending to result in such a product. The exhibition’s curator and Domestic Production Manager for the shop, Kim Morski, met Chitty through the Chicago Printers Guild and invited her to create new work in response to Unison’s collection.

While Morksi’s prompt preserves Chitty’s connection to Unison, the artist’s distinct visual language is legible in both her prints and window pieces. I immediately recognized Chitty’s use of a handheld scanner to produce her photographic prints, while the sculpture made of loose, gridlike weave of latex “threads” in the window (Untitled, 2015) is reminiscent of the basket-like pieces she recently exhibited at Noble Square’s Roots & Culture Contemporary Art Center. Here, the woven latex behaves as fabric, forming three rectangular textiles that are draped and folded over two horizontal beams: one wood, hanging from the ceiling, and the other steel, in the form of a freestanding towel rack. Despite their water resistant material and the gaping holes in the weave, Chitty’s forms reference the towels and sheets for sale inside.

Beside these impractical towels is Chitty’s only obvious incorporation of a Unison product: a totem pole-like tower of black porcelain, Finnish-designed “Teema” bowls (Untitled, 2015). Removing the bowls’ functionality as dinnerware, Chitty stacks thirty of them vertically, inverting every other bowl to create a zigzagging silhouette of 100-degree angles reminiscent of Brancusi’s Endless Column. By sand-blasting the sixth and seventh bowls from the top, Chitty slightly disturbs the “clean beauty and functional substance of modern American design” that Unison strives to emulate. 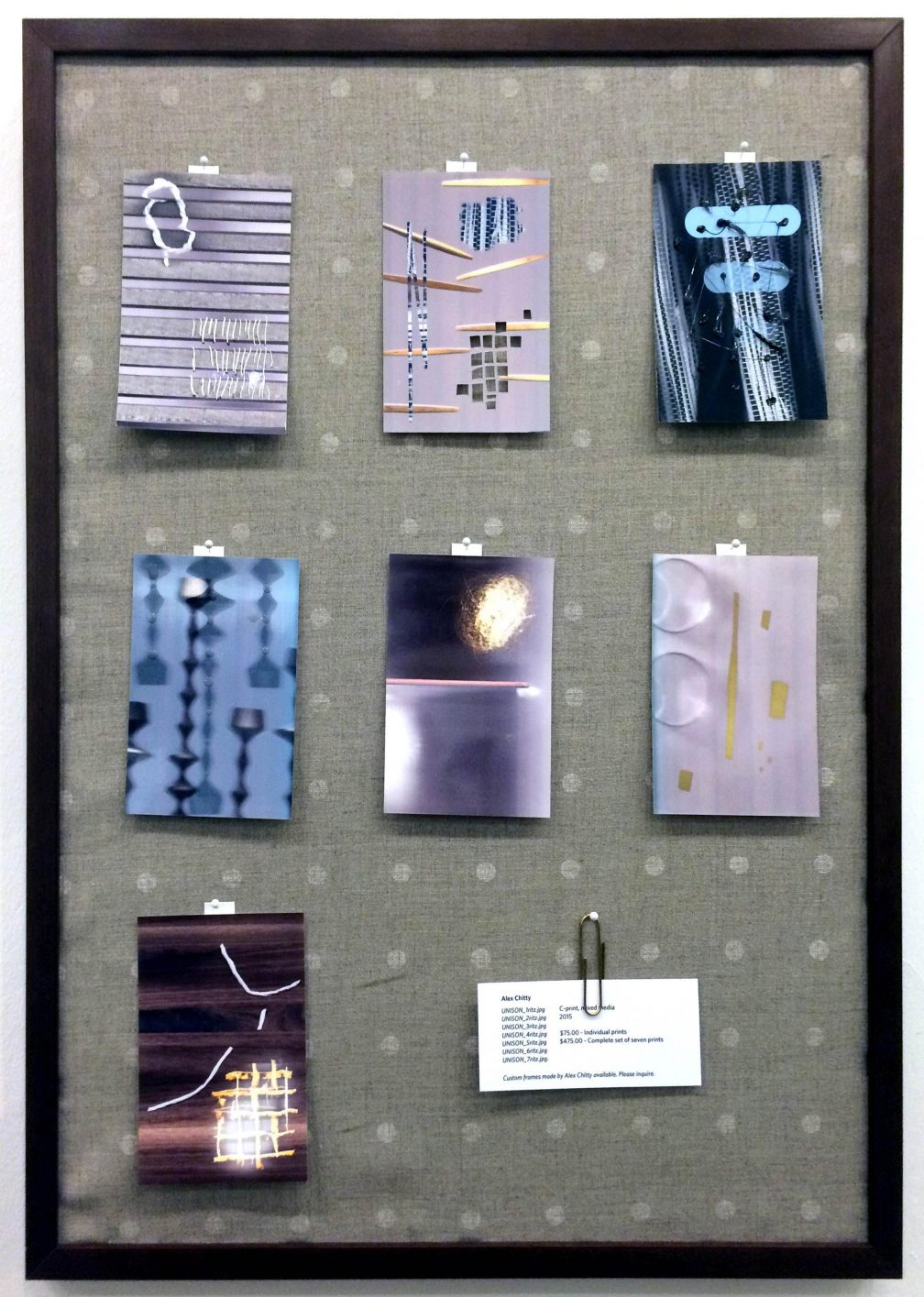 The natural beige of the latex and the shiny black of the Teema tower – shades also characteristic of Unison’s designs – are echoed in Chitty’s seven small c-prints. The mark of her portable flatbed scanner is evident in the glitchy shapes, soft around the edges, or in visible subtle striations similar to those of John Neff’s scanner photographs. However, the source objects for these scans are difficult to identify, further obscured by the artist’s hand – small cutout grids or drips or dots of hot glue. I catch glimpses of the sculptures in the scans: one contains a grid of beige latex, the other a repeating black shape.

Had I not seen the curator Morski post about Chitty’s process on Unison’s blog, I wouldn’t have realized the objects in the prints were scanned Unison products, where she is pictured using her scanner to capture a five-branched black candelabrum. The similarity between the shapes of the candelabrum stems, a repeated motif in the prints, and the silhouette of the Untitled tower is undeniable. This repetition raises questions about the overlap between art and design.

While previous Unison collaborations have reinforced the utility of beautiful objects made for the home, Chitty reinterprets functionality. Her towel-size sculptures cannot absorb water, and her scans of candelabras and drinking glasses only exist as abstract compositions. These objects are deconstructed, even obscured, leaving us with constituents of their original designs. From the surface, we could claim that as Design is flattened, reconfigured, decontextualized, and finally stripped of its everyday functionality, it becomes Art.

Chitty’s pieces complicate such an easy delineation between art and design. To simply evaluate their lack of functionality is irrelevant to their intrigue. Their success as art objects relies heavily on the deconstruction of their underlying design elements. Inside Unison, art and design inform one another, and as Chitty flattens and alters the designed objects – her “collaborators” – this tension collapses neatly upon itself.

ALEX CHITTY + UNISON is on view at 1911 West Division Street through Feb. 21. http://www.unisonhome.com